Proper modeling of non-maturity shares is critical to effective asset liability management. Non-maturity shares constitute the majority of deposits in credit unions, and input assumptions regarding repricing, decay rates, and effective maturity can have significant effects on an institution’s interest rate risk profile.

Are Your Non-Maturity Deposit Assumptions Accurately Modeled for ALM?

Share deposits in credit unions have grown rapidly since 2000, increasing from $350 billion to nearly $1 trillion at the end of 2014. Not only are share accounts at credit unions a main source of funding, but they also serve as a foundation for establishing and maintaining relationships with members. By virtue of being member-owned, credit unions can offer member benefits in the form of lower loan rates and/or higher share rates. Therefore, understanding member behavior is imperative in the business decision-making process for credit unions.

The modeling of share deposits is also crucial to effective Asset Liability Management (ALM) – the practice of managing risks that arise due to mismatches between assets and liabilities while earning an adequate return. From the ALM perspective, it is easier to model Share Certificates and IRA Certificates than non-maturing deposits such as Money Market Share accounts, because Certificate accounts have fixed dividend rates and defined maturities. Share deposit modeling has, thus, become more complex as non-maturity share accounts have grown from 62% of deposits in 2000 to 84% in 2014. Forecasting non-maturity deposits is difficult because they contain two embedded options:

The assumptions used for non-maturing deposits are key drivers in one of the main ALM calculations – net economic value – the difference between the fair value of an organization’s assets and liabilities. Net economic value is a measure of long term interest rate risk which must be managed as part of an effective ALM process. The assumptions used for non-maturity shares also affect other ALM measurements including the effective gap analysis (a report that analyzes an organization’s re-pricing and cash flow imbalances by taking into account the decay assumptions on non-maturity share accounts) and the net interest income earnings simulation.

For these reasons, understanding member behavior for business decision making and modeling of deposits for ALM go hand-in-hand. The purpose of this whitepaper is to illustrate the recent trends in credit union share deposits and help translate these trends into more effective planning and ALM modeling. No matter the size of the institution, a study of the behavior of non-maturity deposits will help a credit union to not only develop better assumptions for its ALM modeling, but also help it to make more informed and better business decisions.

Wilary Winn began by analyzing deposit data for all credit unions included in the quarterly 5300 call reports. The following graphs illustrate the growth in credit union share deposits from December 31, 2000 to December 31, 2014. 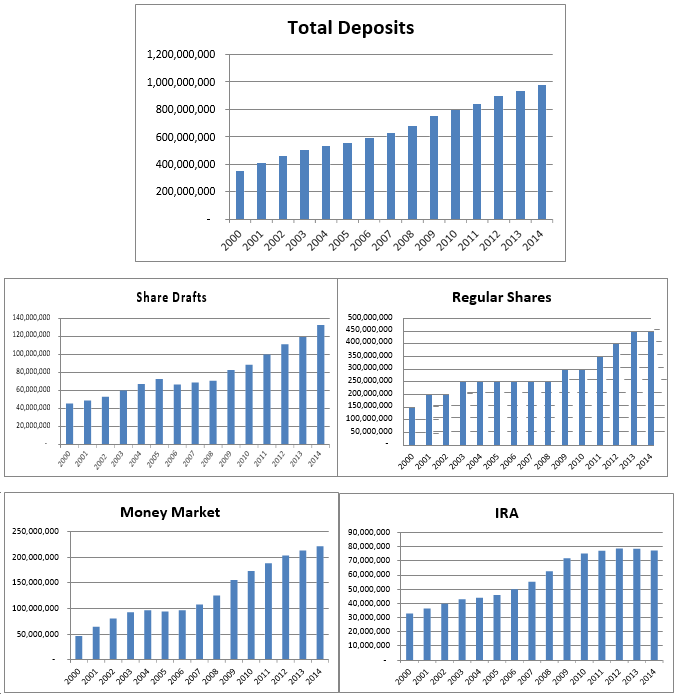 Nationally, credit union share accounts have grown in every category since 2000. Total deposits at all credit unions have grown from approximately $350 billion in 2000 to just under $1 trillion in 2014. The largest increases in deposits during this time period were in Money Market Shares and Regular Shares. Deposits continued growing for most categories in 2014, except for IRA accounts and Share Certificates. Deposits peaked in 2012 for IRA accounts, while the peak for Share Certificates was in 2009. Non- Member deposits experienced the largest increases during 2014.

We believe the increase in non-maturity share deposits combined with a decrease in fixed maturity share deposits is driven mainly by the consumer’s preference for liquidity following the financial crisis. The additional funds that flowed into Money Market Share and Regular Share accounts after the financial crisis are called surge deposits. The existence of surge deposits can also be seen in the deposit composition charts shown below. We can see that the portion of Money Market accounts significantly increased since 2000, while the portions of Share Certificates and IRA accounts have decreased. 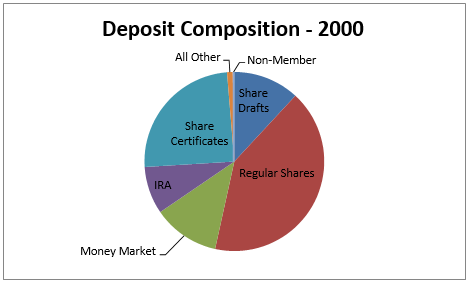 While it is difficult to predict when these surge deposits will be reallocated into other asset classes, we believe it is likely to occur in a market of rising interest rates. Wilary Winn also notes that it is possible to identify potential surge deposits in a particular account. The following graph illustrates an example of our methodology for identifying surge deposits. 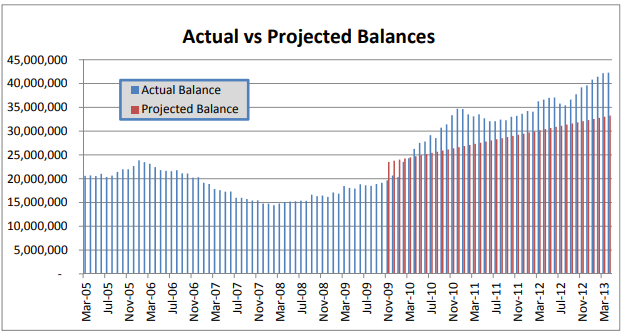 Because surge deposits appeared after the financial crisis, a linear function based on the immediate trend before the existence of surge balances is used to project the balances forward. Surge balances, are therefore, represented by the area of actual balances (shown in blue in the above graph) that exceeds the projected balances (shown in red).

Surge balances are projected to run off faster than other deposits as it is likely there will be outflow of these funds to alternative investments in other asset classes as market interest rates increase. Thus, Wilary Winn recommends that more conservative assumptions be applied to non-maturity balances attributed to surge – higher decay rate and shorter effective maturity. It is also common for institutions to model a portion of surge balances migrating into Share Certificates when projecting net interest income, because depositors have traditionally shown a preference for higher-paying term deposits during periods of high interest rates. 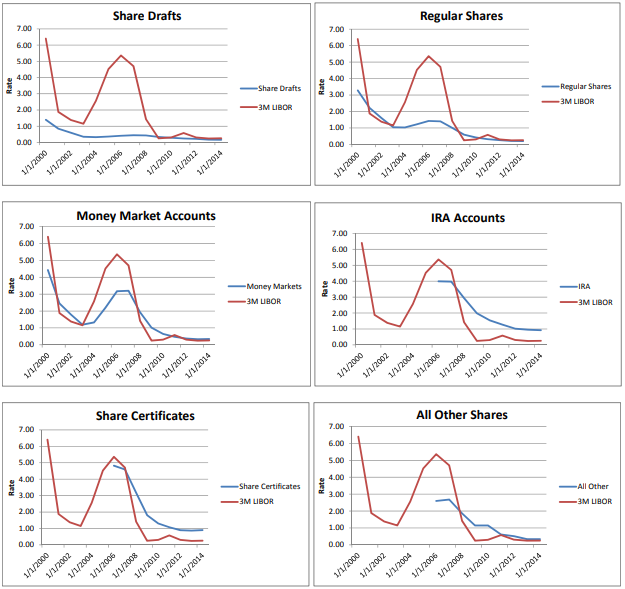 As shown in the previous graphs, credit union deposit dividends are near historical lows. That said, we note that dividend rates on Money Market accounts and Share Certificates did increase slightly in 2014. Dividend rates on all other deposit accounts either decreased or remained the same during 2014.

While Wilary Winn fully acknowledges that past performance is not necessarily predictive of future performance, we believe the regression results provide useful context when developing assumptions regarding future rates.

Two other concepts are important in understanding non-maturity deposit behavior – effective maturity and decay rate. The effective final maturity indicates when the last cash flow for an account is projected to occur. It is analogous to the payoff date on a loan. Effective maturity assumptions are important to consider because of the members’ option to withdraw a portion of or all of their account balance. One way to model account persistency for non-maturity share accounts is to analyze how they performed in the past. Wilary Winn does this by performing a regression comparing the spread between the historical LIBOR and dividend rate versus the average balance for the account type. The outcome, or R- squared, that results from this regression provides a measure of how well changes in average balances are explained by changes in the spread of the dividend rate to LIBOR, or how rate sensitive members are and their willingness to remove deposits. Following are the estimated effective maturities for non-maturity share deposit accounts for all credit unions included in the 5300 reports for the period we analyzed March 31, 2000 to December 31, 2014.

While this is a complex area, we believe the place to start is with a non-maturity deposit sensitivity analysis study. The study enables an institution to understand the unique deposit behavior of its members and benchmark itself to its peers. Gaining a thorough understanding of non-maturity share deposit behavior including betas, effective maturities, decay rates, and surge balances will lead to better modeling assumptions and more effective ALM. Just as importantly, by better understanding deposit behavior a credit union can make better decisions for the long run and provide appropriate levels of benefits in the form of dividends to its member owners.