We are frequently asked about credit union merger activity. This white paper is an update to our “Credit Union Merger Results Through 2018” posting from February of 2019. It is the first in a planned set of ongoing quarterly updates. In this paper, we recap activity through the end of 2020, including the effects of COVID-19. We conclude with our thoughts on where we believe the credit union merger marketplace is headed over the next few years.

In this post, you will find industrywide information about the:

In addition, we provide insights from our own merger valuation work including the:

If you are interested in more detail for a specific topic, please let us know.

Some of the decline in 2020 can be attributed to the significant operational and financial challenges credit unions faced resulting from COVID-19. Credit unions largely shifted attention away from long-term strategic planning to focus on immediate operational needs. Additionally, credit unions faced near-term financial concerns arising from elevated interest rate, liquidity, and credit risks. Despite these challenges, total mergers decreased by just 13 in 2020 compared with 2019 as activity picked up late in the year. 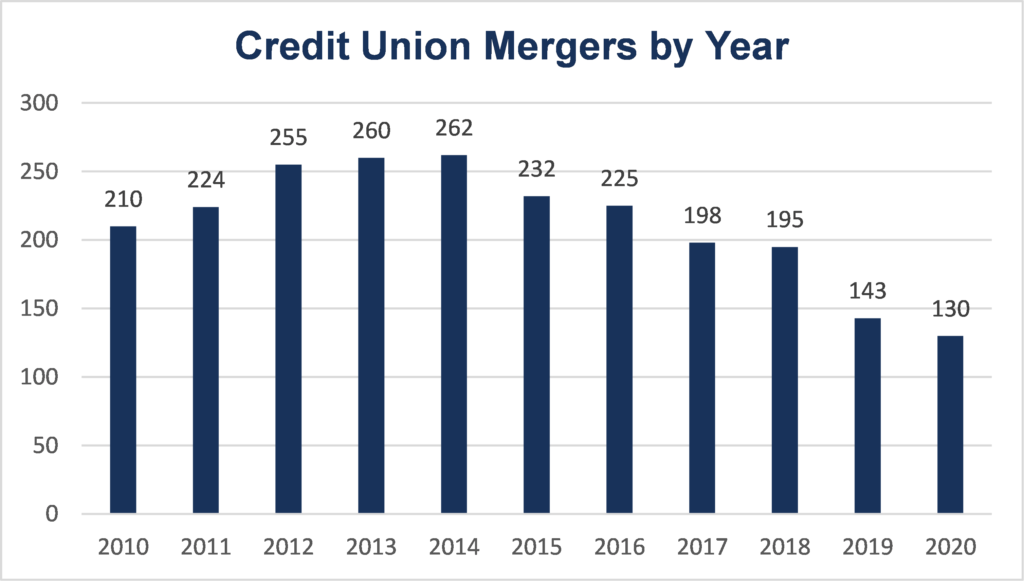 While the number of total mergers has dipped over the previous two years, the average asset size of the credit unions being merged-in increased in 2019 and 2020. 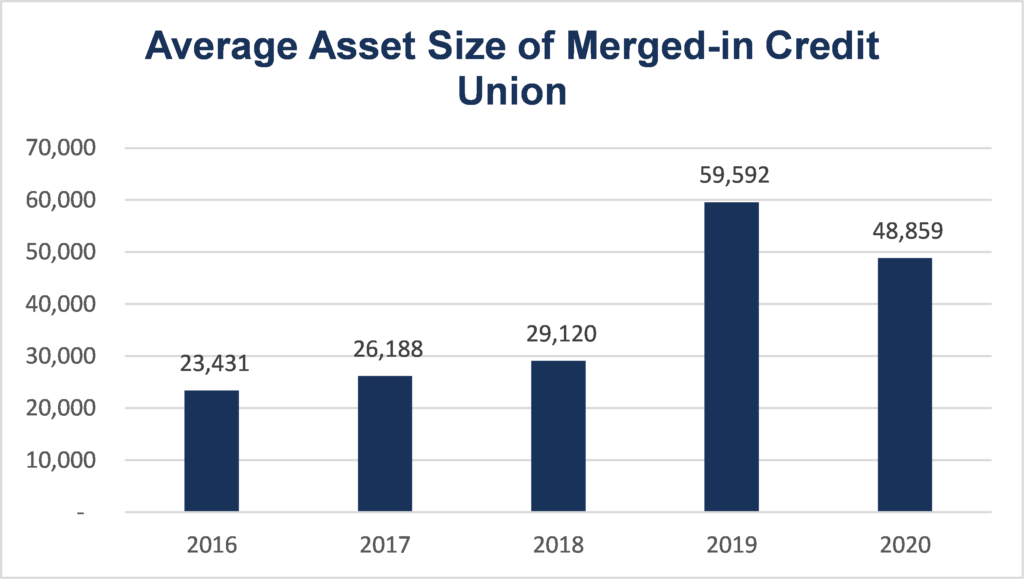 We note that three significant mergers that occurred during this time drove the increases.  In all three cases, the institution merged-in exceeded $1.0B in total assets at the time of the merger.  The three mergers include:

Despite the recent increase in total assets acquired, since 2016 most mergers consisted of a much larger credit union acquiring an institution equal to less than 10% of the acquirer’s total assets. Conversely, only 4% of mergers were classified as “merger of equals” over this same time-period. 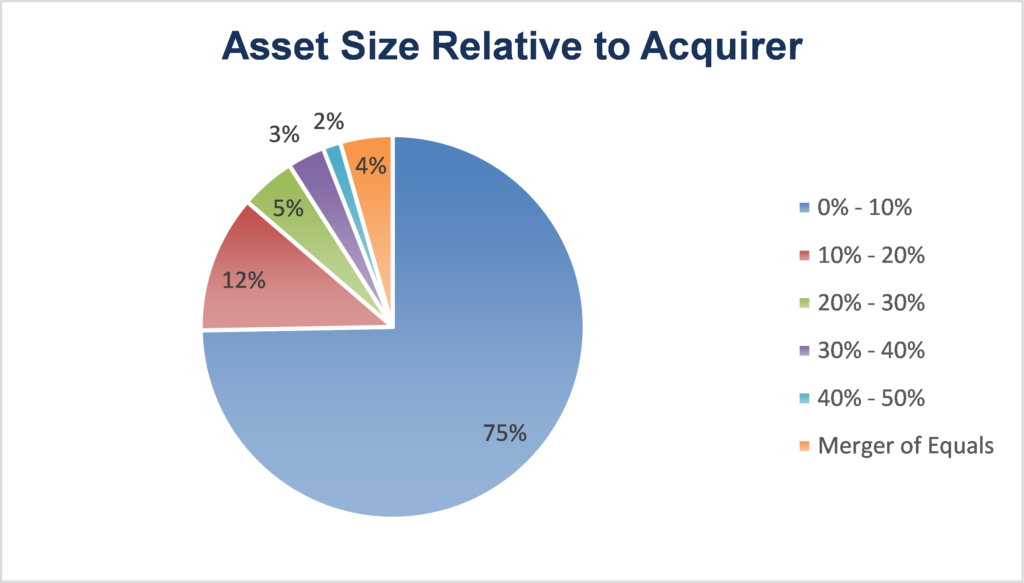 Similar to the number of credit union mergers seen in 2020, credit union acquisitions of banks declined in 2020 following the historically high levels of deals completed in 2018 and 2019. Wilary Winn believes the complexity of these deals from a tax and regulatory approvals standpoint, coupled with the challenges faced in 2020, resulted in a slowdown in these types of transactions. Further detail surrounding the strategic, tax, and regulatory considerations concerning these types of transactions can be found in our white paper titled Credit Unions Purchasing Community Banks. 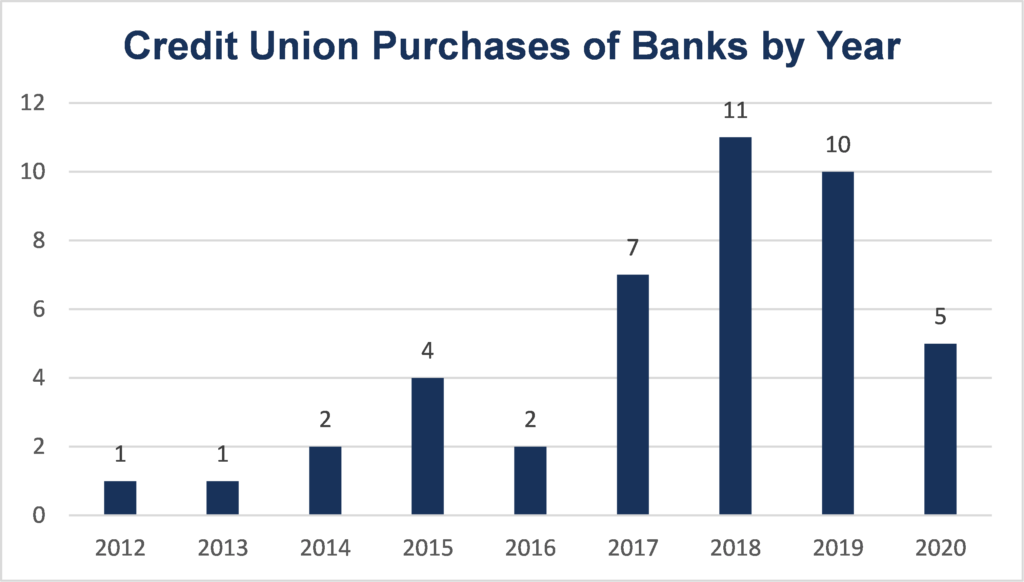 Based on data from the NCUA

Wilary Winn serves nearly 300 credit unions, including 45 of the top 100. We have performed over 300 merger engagements since 2009, ranging in transaction size from $2M to $2B in total assets. We note that all valuation work is performed on the acquired institution. 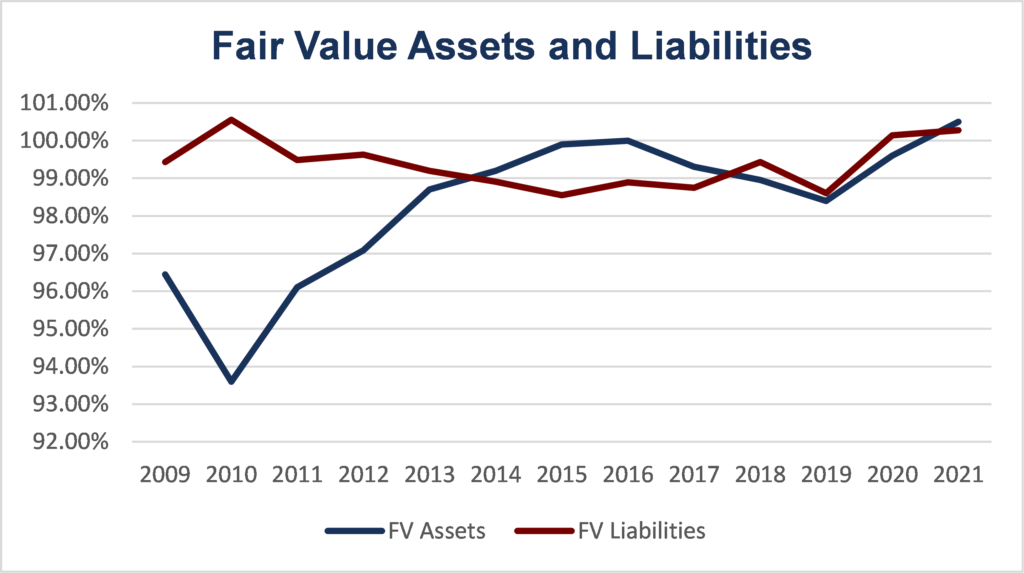 The fair value of assets acquired further increased in 2020 and 2021, driven by rising premiums on loans and investments in the low interest rate environment of the most recent 14 months.

Wilary Winn’s loan valuations include both a mark-to-market discount rate difference and a lifetime credit loss estimate. The graph below shows the inverse relationship between our lifetime credit loss mark and the overall fair value of the loan portfolio. As loan portfolios recovered from the large losses incurred during the financial crisis, our fair value marks increased. We note that the lifetime credit losses forecasted as a result of COVID-19 remain far lower than losses forecasted, and ultimately incurred, following the financial crisis of 2007-2008. We attribute these lower loss estimates to the massive federal stimulus response to COVID-19 as well as to the stricter underwriting standards used beginning in 2011. The decrease in market interest rates in 2020 and 2021 also increased overall loan values as the premiums on the discount rate difference increased. 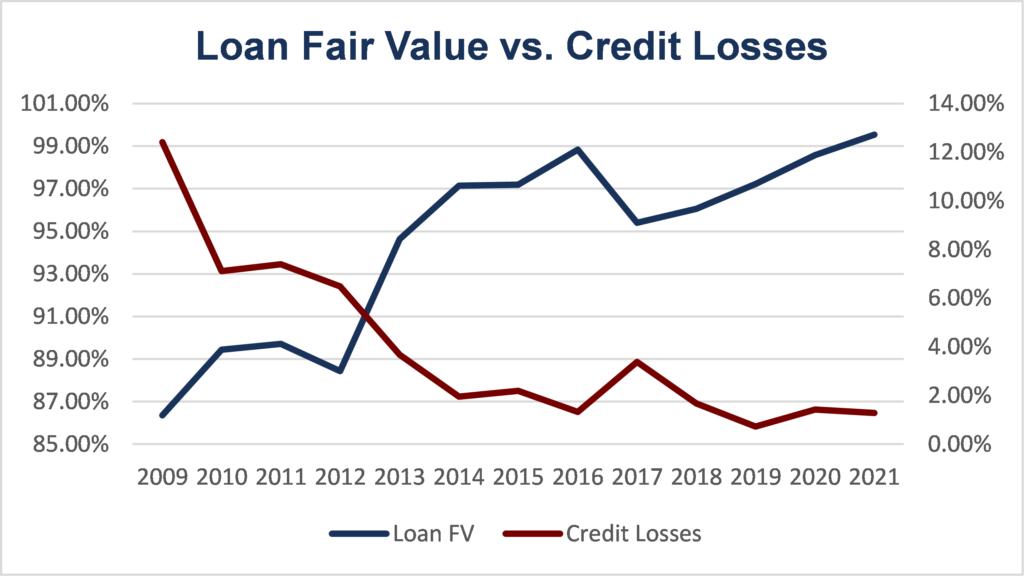 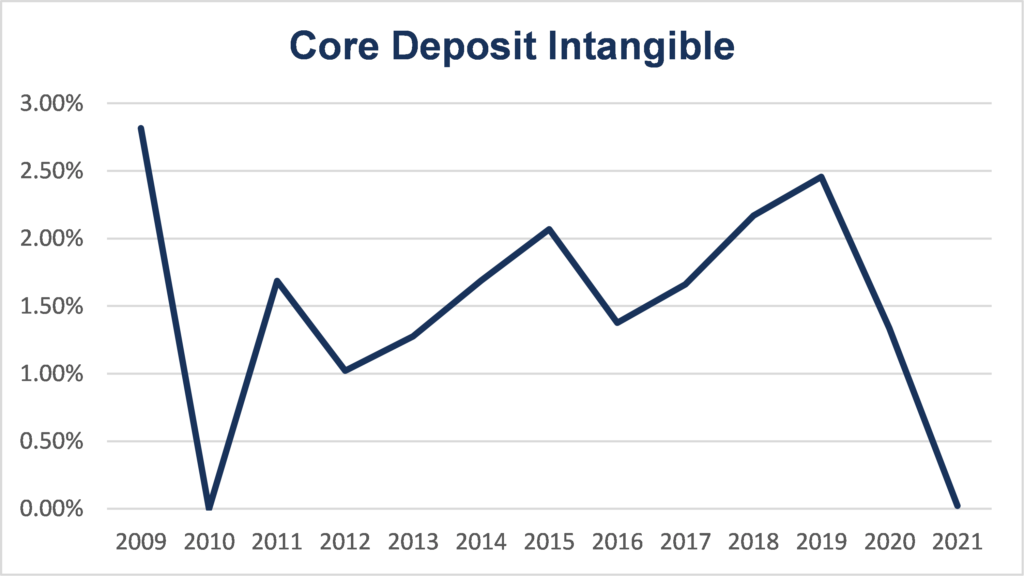 The chart below shows the fair value of the equity acquired in merger as a percentage of book equity for all merger transactions performed by Wilary Winn since 2009. Similar to the fair value of assets, the fair value of the equity acquired has increased significantly over the period shown and is currently above par. Wilary Winn notes that premiums paid for credit unions tend to be lower than bank premiums seen in the marketplace. We attribute this to bank shareholders’ direct access to earnings in the form of share prices and direct dividends, whereas credit unions typically pay out earnings to members in the form of increased services, lower loan rates, and higher deposit rates over time. 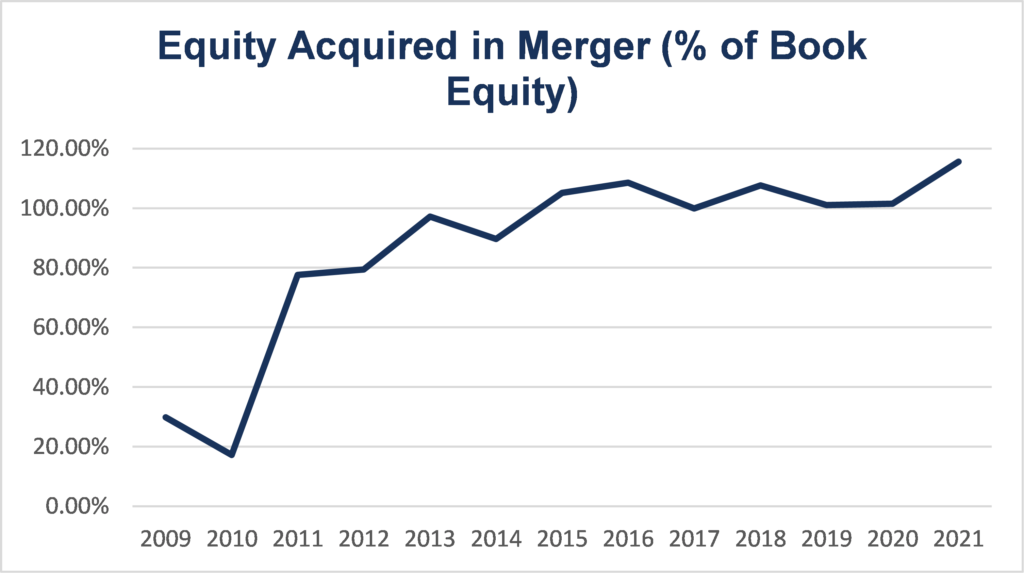 Only 2% of our valuations resulted in a bargain purchase gain, which we generally see only in NCUA-assisted transactions. 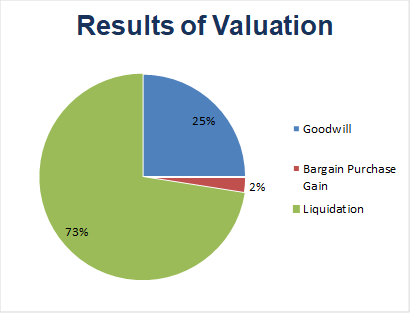 While future merger activity remains uncertain, we have seen an uptick in the number of announced deals in the latter half of 2020 and into 2021. We believe the following trends will drive the credit union merger marketplace over the next few years.