An update to the original release in 2011

Wilary Winn LLC (“Wilary Winn”) is one of the leading providers of valuations of pooled trust preferred collateralized debt obligations (TruP CDOs) in the country.

As of December 2013, Wilary Winn analyzed 62 TruP CDOs containing $24.4 billion of collateral. This represents 55 percent of the 113 total TruP CDO deals issued globally. This white paper summarizes the recent trends we have observed regarding the performance of these securities. As background, Appendix A provides a general description of TruP CDOs.

In addition, TruP CDO default assumptions and cash flows are influenced by:

Wilary Winn began performing TruP CDO valuations in late 2008. Based on the observations and data we have collected as part of our valuation process, we have noted the following from that time through December 31, 2013. 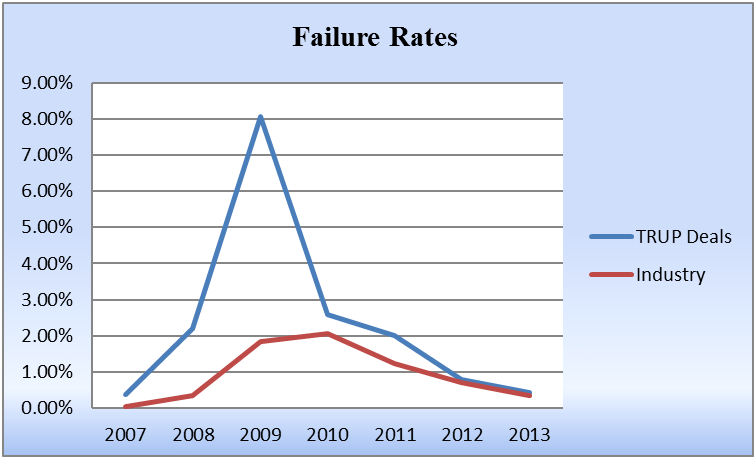 We believe the decrease in the default rate on trust preferred securities is due to the length of the boom, bust, and recovery cycle. Most of the trust preferred securities were issued since 2000 as the banking industry was booming, and therefore were relatively new when we saw the crisis and a wave of early defaults. Prior to late 2010, very few issuers that deferred were able to cure their deferral and subsequently defaulted and many assumed a deferral was a default. Wilary Winn was not convinced this was necessarily so and we began evaluating the collateral supporting the TruP CDO at the issuer level beginning in early 2009 in order to assess the risk of a near-term default. Beginning in 2010, this difference in failure rates began to narrow significantly and we are now seeing many deferring issuers cure their deferral.

Wilary Winn believes we will continue to see a downward trend in bank failures and defaults. One indicator of stabilization is the leveling off and reduction in the number of banks on the FDIC’s “problem banks list.” According to the FDIC[1], additions to this list peaked in 2009 when 450 new banks were added followed by another 182 banks in 2010. The number of banks peaked in the first quarter of 2011 at 888, after which a net of 75 banks were removed from the list in the last three quarters of 2011. In 2012 the list had another net drop of 162 banks. As of September 30, 2013, the most recent disclosure of the list, another 136 banks had been removed leaving a total of 515 banks on the list of problem institutions after ten consecutive quarters of decline.

In a recent research report, Moody’s summarized their 2013 ratings changes on TruP CDOs.[2] In 2013 Moody’s upgraded ratings on 217 tranches in 67 deals and only downgraded ratings on seven tranches in five deals. The upgrades ranged from one to ten notches, with an average of 3.1 notches. They listed five reasons for the upgrades including:

These observations affirm the predictive nature of the TruP CDO cash flow models Wilary Winn began to model in 2009 and 2010.

Wilary Winn analysis of the TruP CDO pools we value leads us to believe that the issuers within the pools which we believe will not default are on average financially stronger than the average of all FDIC-insured institutions. As the two shaded columns in the tables on the following page indicate, the key ratios of the active issuers for which we currently do not have a default assumption are relatively stronger than the aggregate for all FDIC-insured institutions. The banks have higher Tier 1 capital, fewer non-current loans, and higher loan loss reserves. On the other hand, they have a slightly higher Texas Ratio than the aggregate. These tables are as of March 31, 2011 and September 30, 2013 respectively.

We note that in order to construct the table we summarized the active issuers by creating a weighted average based on issue size, then divided the issuers into categories based upon their status of deferral and whether or not Wilary Winn assigned a default assumption to the issuer. To ensure an accurate comparison, Wilary Winn calculated the standard deviation across the issuers for each ratio and removed any issuer that fell more than three standard deviations above or below the average for that ratio.

As the tables indicate, the key ratios have drastically improved in the past two years. Wilary Winn believes that the relative strength of the remaining issuers in the deals, excluding those assumed to default, creates a “survivor bias” and we believe future default rates for these trust preferred securities will likely be consistent with the long-term default rate for the industry versus the default rates we observed in 2008 through 2011 for issuers of trust preferred securities. As a result, Wilary Winn believes that there is no need to vector terminal CDRs upwards solely on the basis of high historical TruP failure rates.

In our experience, most experts are basing their estimates for longer-term rates of deferral and defaults on historical averages. For example, FTN Financial has estimated that the annual average default rate (defined as bank failure) from 1934 to 2008 was 36 basis points which is very close to the 0.35% bank failure rate in 2013. As the following chart shows, the rate of failure increased significantly during the financial crisis but dropped to historical levels in 2013. 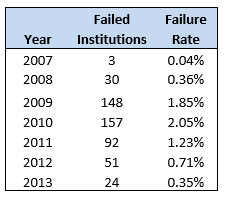 Because of spikes in failure rates in 2009 through 2012, some experts expressed the belief that a long term failure rate should be based on the most recent 25 years, which approximates 75 basis points versus the 36 basis points calculated in the longer duration FTN study. Wilary Winn notes that the 75 basis point failure rate includes two extremely challenging time periods for the banking industry, which may not be indicative of future long-term trends. As the following table shows, the 25 year failure rate resembles a barbell curve, with failures heavily concentrated in the late 1980s during the savings and loan crisis and in the most recent financial crisis of 2008. 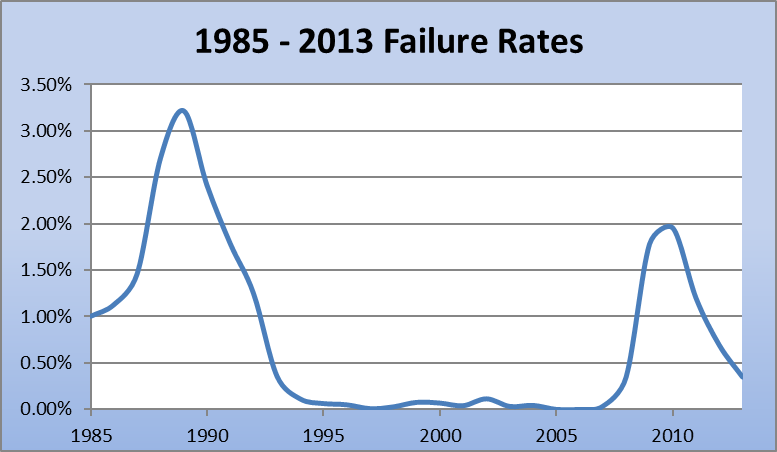 Because of the barbell distribution, we base our long-term default rate on the 0.36% provided in the FTN study which is also close to the 0.35% failure rate in 2013.

The fact that a trust preferred issuer defaults does not necessarily mean that an investor will lose all of their investment. Thus, it is important to understand not only the default assumption, but also the expected loss given a default, or the loss severity assumption.

On November 21, 2008, Standard & Poor’s (S&P) published, Global Methodology for Rating Trust Preferred/Hybrid Securities Revised. In that study, S&P indicated that their assumption for recoveries on hybrid securities issued by banks is 15% equating to a loss severity assumption of 85%.

Moody’s Analytics has performed research that confirms that recoveries on defaulted trust preferred securities are low (i.e. less than 20%). Research by Moody’s Analytics shows loss severity based on the type of impairment:

Wilary Winn has observed a large range of loss severities anywhere from 0% to 100%. We recognize TruPS holders of certain defaulted issuers will recover some portion of their investment, as some issuers currently in bankruptcy proceedings are expected to have sufficient assets remaining to repay at least a portion of their TruPS. We have also seen an increase in the number of institutions declaring bankruptcy under U.S. Bankruptcy Code Section 363. Under this structure, the bank holding company files for Chapter 11 bankruptcy protection while another entity recapitalizes and purchases the bank subsidiary. According to SNL Financial, this can provide for a quick and cost-effective way to complete the sale while protecting the acquiring group from liability and potentially preventing holders of TruPS from blocking a recapitalization[3]. We believe the appeal of structuring a sale under this code has increased due to the increase in the number of TruP CDO issuers in which the health of the bank subsidiary has improved substantially while the holding company, which is responsible for repaying the issuance in the CDO, has continued to struggle. However, in certain recent cases the holders of the TruPS have been successful in arguing against the original terms set forth in the 363 sale and thereby increasing the payout to the TruP CDO holders.

Trust preferred securities generally allow for prepayment without a prepayment penalty any time after five years. Prepayments affect the securities in three ways. First, prepayments lower the absolute amount of excess spread, an important credit enhancement. Second, the prepayments are directed to the senior tranches, the effect of which is to increase the overcollateralization of the mezzanine layer. However, the prepayments can lead to adverse selection in which the strongest institutions have prepaid, leaving the weaker institutions in the pool, thus mitigating the effect of the increased overcollateralization. Third, prepayments can limit the numeric and geographic diversity of the pool, leading to concentration risks.

Since the beginning of 2011, we have seen 179 issuers fully redeem their TruPS across the range of deals we value (additional detail is shown in Appendix C). Many of these prepayments have come from larger banks that have prepaid either because they can find less expensive funding elsewhere or because of the restrictions imposed by the Dodd-Frank Act. We have also seen a number of partial prepayments.

On December 10, 2013, Federal Banking Regulators issued final rules regarding implementation of Section 619 of the Dodd-Frank Act (“the Volker rule”), more specifically “Prohibitions and Restrictions on Proprietary Trading and Certain Interests In, and Relationships with, Hedge Funds and Private Equity Funds”. The Volcker Rule stated that “a banking entity may not, as principal, directly or indirectly, acquire or retain any ownership interest in or sponsor a covered fund”. The final rules took the community banking marketplace by surprise because it appeared that a very high percentage of TruP and Insurance CDOs would be considered “covered funds”. The rules further provide that banks must dispose of their covered funds by July 21, 2015, subject to a regulatory extension of up to five years. The accounting implications related to TruP CDOs were dire. Under the accounting standards, a bank must record only the credit portion of other-than-temporary-impairment (“OTTI”) provided the bank does not intend to sell the debt security, or it is more likely than not that a bank will not be required to sell a debt security prior to its anticipated recovery. The July 21, 2015 required sale date tripped the more likely than not threshold and the banks would therefore have to mark their TruP CDOs to fair value through the income statement. The accounting implications created an uproar including the filing of a suit by the American Bankers Association against the Federal Banking regulators.

On January 14, 2014, Regulators released a final interim rule authorizing retention of TruP CDOs backed primarily by bank-issued trust preferred securities. The Regulators provided a non-exclusive list of the TruP CDO funds that are deemed to be “not covered” and therefore not subject to the Volker Rule restrictions on ownership. Unfortunately, not all Pooled Trust Preferred CDOs made the list, specifically CDOs backed by collateral issued by Insurers. Nevertheless, the ABA dropped its suit on February 13, 2014.

Due to the uncertainty invoked between the original release of the Volcker Rule and the final interim rule, there was a noticeable increase in trading activity. However, we believe most of these trades occurred under distress and did not represent trades made in an orderly market.