This white paper is part of a continuing series highlighting credit trends in the consumer lending marketplace. See the Resources page of our website for other research. Our focus here is on the recent uptick in auto loan delinquencies. We begin with a brief summary of the overall consumer debt marketplace to provide context. Next, we discuss the auto loan marketplace in detail, including by type of lender. Finally, we discuss the financial well-being of the millennial generation in detail, as this segment of the United States population has exhibited steadily increasing rates of transition to seriously delinquent status on auto loans.

The following table compares the period beginning, peak, floor, and ending concentrations for each of the lender types shown in the previous chart. Over the period shown, credit unions and alternative finance companies have increased their market share at the expense of banks and captive auto lenders. As of 2019 Q1, auto loans held by credit unions comprised 29.75% (period peak) of the outstanding auto loan debt and finance companies held 17.06% (near period peak), whereas banks held 31.26% (near period floor) and captive auto lenders held 22.25% (period floor). 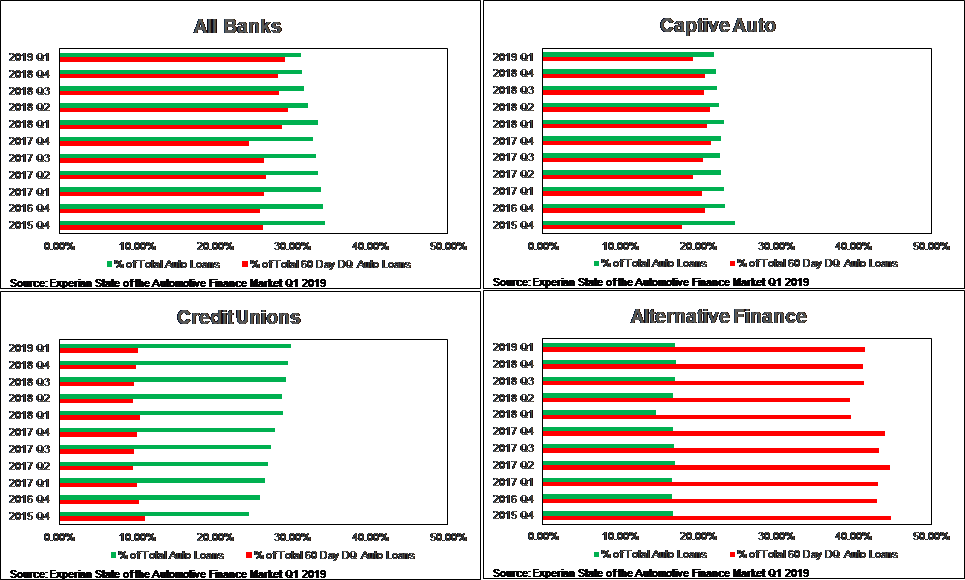 On a side note, the same age groups haven’t displayed a similar dramatic run-up in transition to 90+ day delinquency status on total loans, as shown in the following chart. This could be indicative of millennials being more willing, or more able, to default on their auto loans as opposed to their student loans, credit cards, or mortgages.

The millennial generation, including individuals aged 23 to 38 in 2019, makes up approximately a fifth of the United States population. Some regions have a higher share of millennials (West with 23.29%), others have a lower share of millennials (Midwest with 21.26%), but millennials are roughly about a fifth of the population of each region and nationally. Given that the higher end of the millennial cohort is age 38, it can be stated that the generation is beginning to assume the important role of being the primary drivers of the U.S. economy, oft occupied by the middle-aged. Thus, the economic livelihood of the millennial generation will play a pivotal role in overall economic performance in the coming decade. This fact makes the increasing transition to 90+ day delinquency status on auto loans for millennials all that more concerning and warrants further investigation into the economic well-being of the millennial generation. We begin our millennial analysis by showing that total debt held by the cohort has been increasing. Next, we point out that millennial unemployment rates are near historic lows and that the cohort has experienced modest growth in inflation-adjusted earnings. Finally, we discuss that the combination of increased leverage and decreased net worth for millennial households is potentially causing the cohort to transition to 90+ day delinquency status on auto loans at a higher rate.

We believe this debt pressure caused the net worth of millennials to decline.

The following chart plots the median net worth against the leverage ratio for under 35 households, from year-ends 1989 to 2016. The net worth of under 35 households has increased little since the aftermath of the financial crisis and is significantly lower relative to pre-recession highs. How can this be the case given that the economy is booming, and the stock market is on an historic bullish run?

A big part of the reason is that under 35 households largely missed out on the post-crisis bull market run-up. The following chart plots the average value of stock holdings for those who held stocks against the percentage of households that owned stocks, from year-ends 1989 to 2016. In 2007, 13.7% of under 35 households held stocks. In 2013, that number was down to 7.2%. Plummeting stock prices and portfolio values stemming from the recession led to young adults shying away from equity markets, and as a result, many households missed out on the run-up. From December 2010 to December 2016, the S&P 500 returned an annualized 12.65% with dividends reinvested, whereas from December 2016 to December 2018 that number was down to 8.95%. It is concerning that under 35 households are beginning to increase their ownership of stocks at what could be the tail-end of the bull market, especially in the context of the previously outlined issues of low median net worth and an increasing transition to 90+ day delinquency rates on auto loans.

Automobile debt is only a fraction of total consumer debt, but any signs of weakness in the consumer credit market are worth monitoring. The overall asset quality of outstanding and new originations on auto loans remains strong and overall auto loan delinquency rates remain near post-recession lows. However, the millennial generation has exhibited significant increases in the rate of transition from a 30-60 day delinquency status to a 90+ day delinquency status on auto loans in recent years. This is especially concerning given that the millennial generation is supposed to be the future engine of the United States economy, and the additional context that millennial households have a poor net worth, a high leverage ratio, and are beginning to increase holding of stocks at what might be the end of the bull market.

[4] Means and medians aren’t apples to apples (median auto and student debt metrics weren’t available), but the chart still paints an insightful picture into the changes in economic standing for America’s young adults.